Another Devstream has come and gone, which means it’s time for an overview! If you were too busy to watch the full episode, or are looking for an easy way to CTRL + F search through what was discussed (FYI – don’t try “Chromette”, you’ll only be disappointed it), you can read the full recap down below.

· Two Gift of the Lotus Alerts are live on all 3 platforms for 24 hours after the stream. Carbs are important – don’t miss your chance at a Riven and a potato!

· We’re launching on the Nintendo Switch on November 20th!

· Our next Console update is aimed to go to Cert next week.

· TennnoGen Round 14 has been announced!

We’re aware of our current content drought, but we have some amazing things planned for the rest of 2018 for our content-hungry Tennos. Our PC community can expect a mainline update next, to help pave the way to Fortuna. Following Fortuna’s release, we’re also anticipating another update with more Fortuna content, to help us better tackle the behemoth that is this release.

· An FX intensity scaler in your options.

· Improved gear wheel to allow for more gear items in-missions. You can keykind the first 12 slots, and the UI will spiral to give you access to more gear slots than before.

· Corpus Glaive! You can see it here!

We talked about our plans to improve this system in a previous (now-outdated) Dev Workshop, but after gathering community feedback, we’ve iterated on our plans.

As you can see in the Twitch clip above, Daily Logins have new UI, and come with some fun characterization that makes each daily login feel a little more personal. We are still planning to allow you to select your rewards on milestone days, with 2 exceptions: Day 800, and Day 1000. The Armor and Syandana do not effect gameplay and we want to make sure that our long-time players have a clear way of showcasing their dedication to Warframe!

Following the 1000-Day milestone, we will be offering evergreen bundles every 50 days. The contents of these vary, but here are some examples Reb mentioned on-stream (which are subject to change):

We mentioned that Orb Vallis is bigger than the Plains of Eidolon, but there’s a map to help you get a better idea of its scope! The elevator to Fortuna is located somewhat in the centre of the map – see if you can recognize any other landmarks from what we’ve shown on stream so-far: 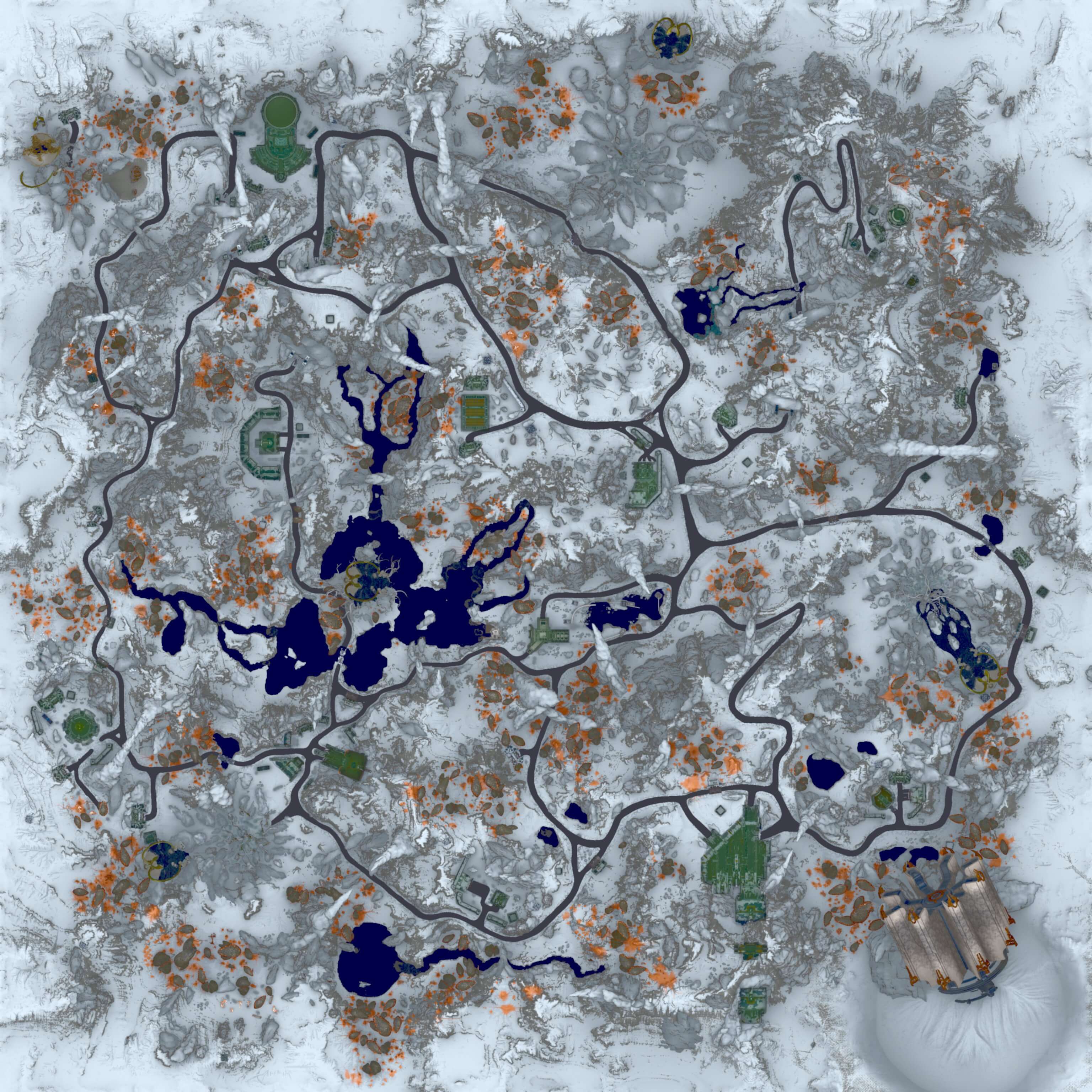 Not included in this map is the network of caves littered throughout Orb Vallis as well – as the team says, “they’re not small”:

As an update from our poop escapade last Devstream, here’s a look at the variety of fauna you will find in Orb Vallis. A Virmink Echo-Lure will have the chance to call to any of these guys: 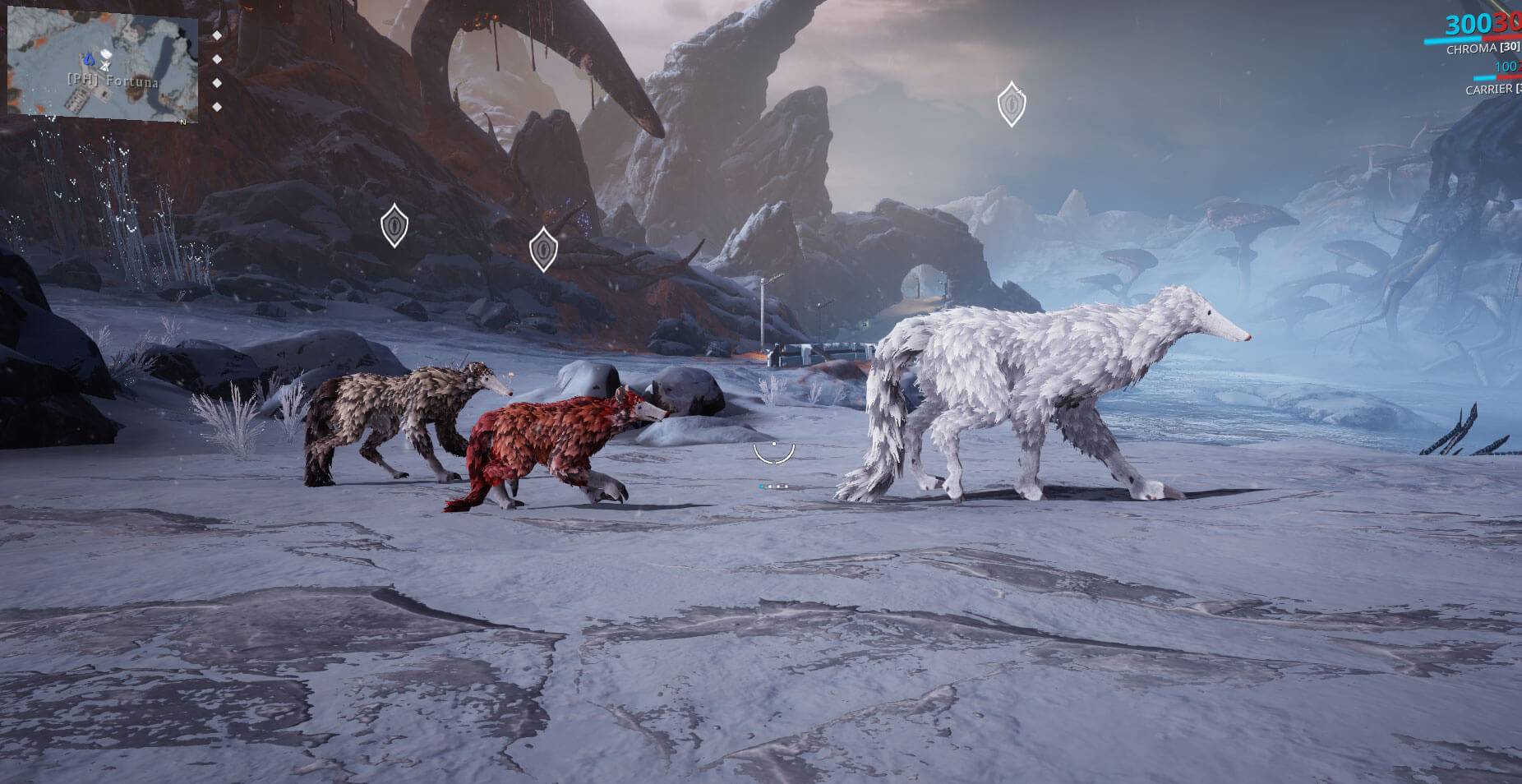 Additionally, if you were looking to see how some of the sounds were made, part of them were sourced from huskies (jealous!!!) and uh… whatever this is.

Meet Rude Zuud – your resident Kitgun supplier! Not much to share about kitguns themselves, but here’s a clip of Reb making one:

We took this unmodded Kitgun into action but it was missing sounds, but boy did it look awesome!

We’ve shown quite a bit of K-Drive in previous Devstreams, but here’s a recap of the new info provided by the team this week:

· Style mods will give you cool attack bonuses (like the ability to whack-a-corpus with your K-Drive) upon completing tricks.

· Board flips will do damage!

· You can dismount and re-mount the K-Drive mid-air – if you get kills during your air time, you get a score bonus:

Also, here’s some more Deck Art, which you will be able to use both on your K-Drive and in your Orbiter as art!

This content is not coming with Fortuna, but it’s something we’re hoping to release in 2019! The reason for this delay is because this system will be a whole new way of playing Warframe; we’re fitting together different parts of the game and melding them into a whole new mission type.

Here’s a look at some of the concepts for this new system, including enemy ship concepts, Railjack concepts, component concepts and more: https://imgur.com/a/xIKwjUj

All factions are getting new units with Railjack, or are having their Capital ships updated.

Your Railjack will have different types of engines you can build and customize – different stats and appearances!

This has been a much-requested change – you’ll be able to use your Archwing weapons in regular missions as your Warframe! This will be a new heavy weapon type, with this own unique stance that overrides existing stances, like melee does.

We want to honour the investment you put into your weapons, so we’re continuing to blur the lines between Archwing and regular Warframe gameplay following its addition to the Plains of Eidolon.

Geoff mentioned that these might take up a primary and secondary weapon slot when equipped, but we’ll keep you updated.

The Corpus Gas City remaster is coming along beautifully! Steve mentioned it was an 80/20 split of tiles that need mobility to traverse, and also mentioned that this might be a late fall release.

This remastered tileset is making use of all the new materials and lighting tech we’ve been working on. You can see it for yourself at this timestamp here.

· Melee 3.0 is still in the works – we’re still iterating on it internally, but once we have more to share about its progress, we will do so!