It’s been a while since you’ve seen all of the crew’s faces and we hope what we brought to the table (and couch) this week made up for our extended absences! In this episode, we showcased Khora’s new kit, an update on our Void Onslaught — now Sanctuary Onslaught – mode, TennoGen Round 12 and more!

As always, full details and discussion can be found in the actual livestream but we’ve laid out all the highlights for you below:

· Watch any Warframe Partner on Twitch for 30 minutes this weekend and grab your own Nesyr Kavat Gene Masking Kit!

· As usual, the Gift of the Lotus alert is live on all platforms for 24 hours following the stream!

Khora is a master of beast and ensnaring her foes – perhaps playing with them a bit too!

Ability Two (‘Ensnare’)– Ensnares enemies, and will slowly pull in other foes who stray too close.

Here they are in action:

Ability Three (‘Call Venari’) – Bring out your Kavat, Venari! This makes use of the original mode switching: press 3 again to cycle through attack mode, defensive disarm mode, and healing mode. In this final mode, Venari will move from lowest health player to lowest health player healing them.

Ability Four (‘Strangledome’) – Each point of the Dome is its own CC point, that grabs an enemy, holds them into the air and does damage over time.

For those not in the know, this mode started out as Dark Sectors 2.0, and we have decided to decouple it from that system and let this gamemode stand on its own while we look into ways of bringing Dark Sectors back. We talked about it in a previous Devstream as “Void Onslaught” but now it is being linked instead to Cephalon Simaris himself.

Simaris has captured Khora in the Sanctuary, and to release her you must take on the Onslaught. When you enter, you are given just about 2 minutes to survive a wave in an ever-destabilizing mission. Collect Void Stability nodes that are scattered around the map to keep your Void Stability high while mowing through hordes of enemies. After 2 minutes, a portal appears to take you into another random tile with increased difficulty and instability.

At the start of each wave after the first, players are given a 45 second Focus bonus, the percentage of which increases with each wave. Kill as many foes as you can during this time to make the most of this boon!

At its core, Santuary Onslaught is designed to be bite-sized intense Warframe content with intensity, its difficulty ramps up very quickly. Our plans are for this to be implemented in two modes: the regular and the hardcore.

In the hardcore mode, the challenge knob is turned up to 11 and the Focus bonus (and rewards) reflects this change. You might be trying your hand at something we as Devs can’t even beat. If you’re powerful enough to charge through waves at this difficulty, you can also potentially receive a reward that will help you showcase your strength even more:

These will be only be one small part of the larger drop table pie, but they come with their own unique and bizarre affects. Useless might be another term for these Mods as they add no battle incentive other than the ability to humiliate your enemies on the battlefield.

One example was a Mod that grew flowers on your foe with each critical hit. 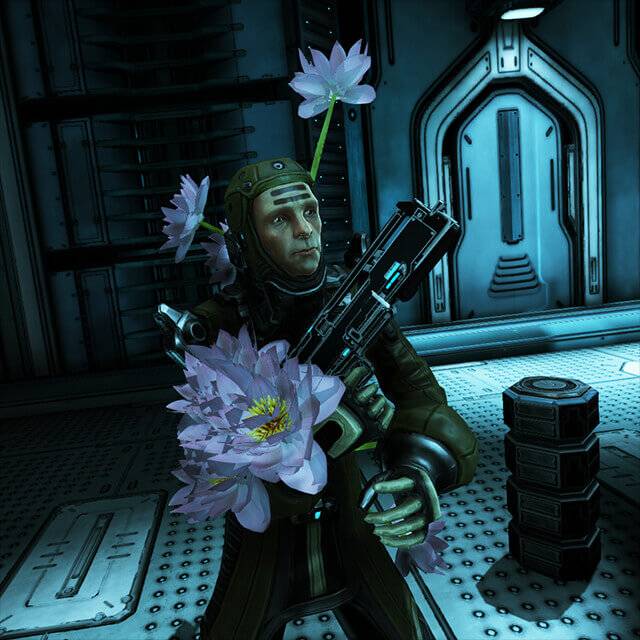 Keep in mind these aren’t the only rewards – just what was shown. One of the biggest challenges when adding new fun content is knowing there always is a reward part of the equation to get right- bear with us as we fiddle with this!

There’s a lot that we have planned to be coming with Venus – including more vehicles! We’re currently looking at improving vehicle AI and hopefully adding the ability for players to control their own! Road systems, vehicle physics, etc. are all part of the larger package so here’s just a sneak peek at all of the work we’re funnelling into Venus:

With our work on Venus, we’ve also been making changes to how your movement within a Landscape and its different environments (caves vs open air) affects the sounds you hear:

The Round announcement is finally here! See what new Tenno-created cosmetics yo can expect in our official thread: https://forums.warframe.com/topic/944922-tennogen-round-12-accepted-items/

We revealed our concept for Vauban’s Deluxe Skin in Devstream 105, but we forgot about his hammer!

If you follow Steve on Twitter, you’ve probably seen him tweet a lot of awesome concepts for a UI Remaster we’re working on. The font scaling changes that were added this year helped paved the way for a much larger UI smash to help address feedback we’ve received from all corners of the community.

Hi-res screenshots of these concepts can be found in this imgur album, but we’ll use a few in this overview to talk about intent and goals behind this remaster. 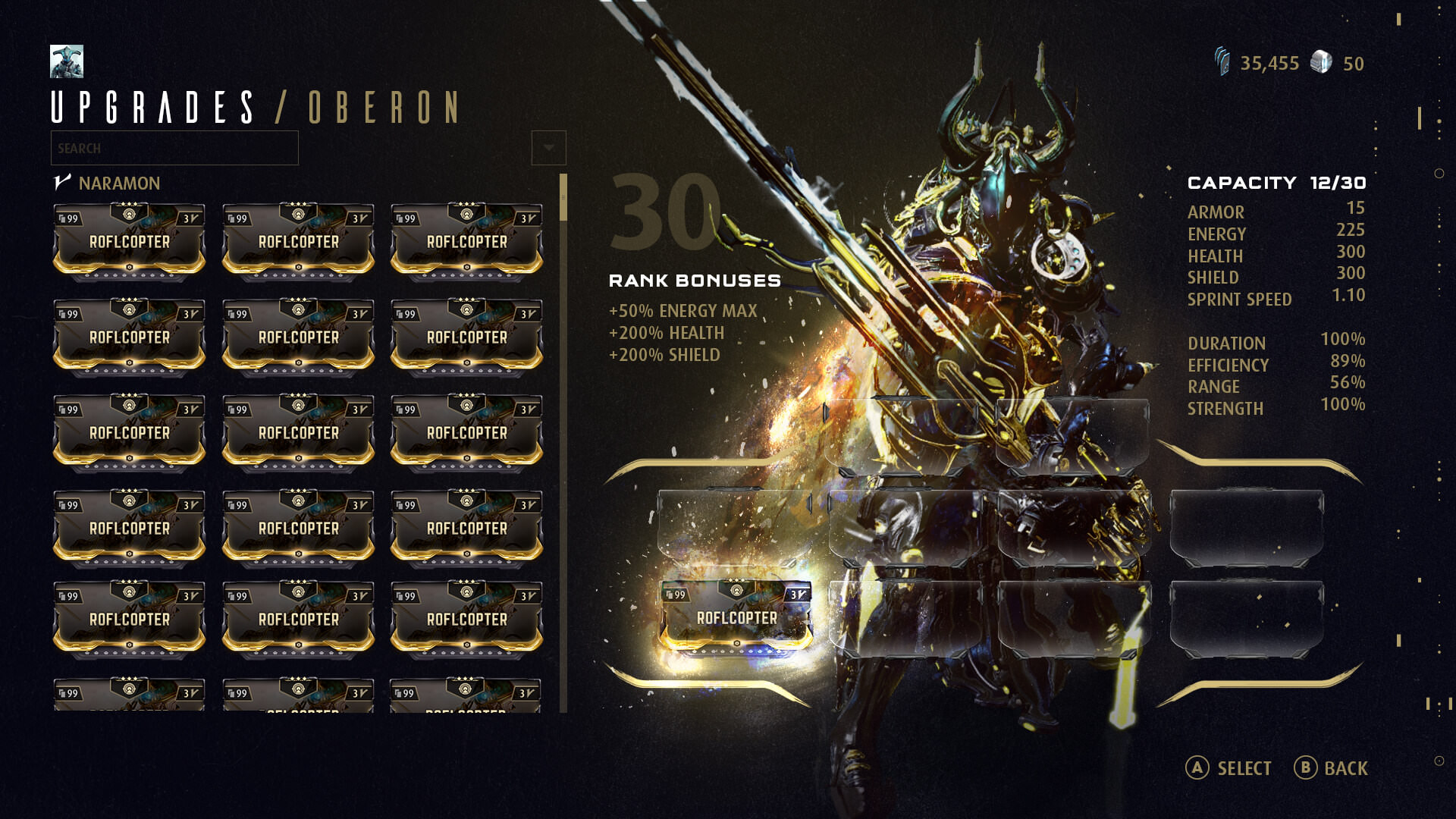 First and foremost – say goodbye to horizontal scroll! With the growing inventories of players, making these menus simpler and easier to navigate is a key point of this remaster. Steve also mentioned having menus or aspects ‘unlock’ as your MR goes up, similar to how Arcanes and the Operator are locked behind your progression as well.

Secondly, we’ll be adding the ability to choose themes for your UI to help it really feel personalized!

Goals is to let you theme your UI the way you like it.

In addition to the visual changes, we are working on implementing more consistent controller support and bringing mouse support to other platforms as well!

With the Moa Pet coming, we’ve taken this time to look at all the moving parts within the Companion system as a whole and see how they fit together. As a result, we’re exploring ways to unify how you acquire them, to adjust modding so your furry or electronic friends have range capabilities and also follow you around, and more as we review the system overall.

This is very much still in concept stage, but as always, if you have feedback, be sure to share it with us!

Scythes are a fairly unloved weapon type and we’re looking to change that! With the Melee Weapon rework we’re hoping to release (like what we did with our Primary and Secondary weapons), Scythes might be using the Heavy Blade stances either in addition to OR instead of their own Scythe stance.

Some resizing and tweaking might be needed, and as always nothing is confirmed until it is released, but this is where our thoughts are currently for the future of Scythes.

· We’re re-relighting the Dojos to let you have control over the actual lighting colours!

· Changes to the IPS system are still being discussed but we have nothing to share just yet.

· Venus will have more terrain height variation and it allowed us to make it a lot larger.

· Do not expect any word about Umbra on a Devstream.

· Hydroid Prime Trailer is done, just waiting on Ballas to show up! Zephyr Prime’s trailer is still being worked on.

· No word on the Grineer Ghoul weapons.

Missed our update notes this week but want to see what important changes came to Warframe? We’re highlighted all the important bits below!

· You can now Quick Melee while Spearfishing in the Plains!

· Improved balance between Vomvalyst and Infested enemy spawns during the Plague Star occurrence at night.

This gamemode on Taveuni offers players a much requested avenue to acquire Kuva outside of the Siphon/Flood mechanic, and on the aptly named Kuva Fortress! Players, both Public and Solo, now balance risk and reward as they sacrifice their Life Support Towers for precious Kuva.

Check out the full Dev Workshop here for examples and FAQ.

· No need to stun first! Operator Void Blast OR Void Dash can be used to disarm their Kesheg and turn them vulnerable. Added a pulsing red glow around Kuva Guardians for a few seconds to depict when they are vulnerable (similar to the Teralyst).

· Increased base Health from 300 to 400, and adjusted their health type to be in line with the rest of the Grineer. Weaker against Heat and Viral but more resistant to Gas.

· Brilliant/Radiant Shards are not removed from player inventory until the respective Eidolon spawns.

· Players can now remove their Shard after inserting it into the Shrine (until the Eidolon spawns, at which point it is removed from their inventories and consumed by the Shrine).

· All Shards are removed from the Shrine and returned to Player inventories if a Host migration, extraction, or sunrise occurs before the Eidolon spawns.

· Vomvalysts no longer drop Sentient Cores when they are auto-‘killed’ at sunrise.

Added a Chat command to enable ‘Do Not Disturb’. Enabling this will prevent any new Private Messages and mission invites from appearing. In addition, it will also auto decline game Invites and auto-reply to private messages to indicate that you are unavailable. If you have a private conversation tab active or if you initiate a private conversation, you will still be able to communicate.

· Disable Do Not Disturb by typing /normal in Chat