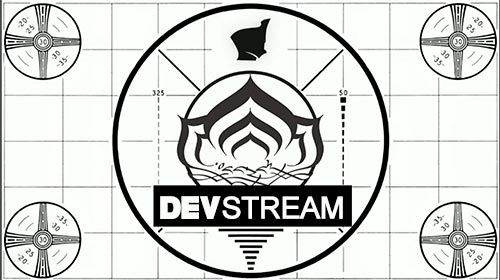 Between dramatic changes to Syndicate Standing and the looming excitement of our mustache World Record attempt, Devstream 41 was already primed to be filled with some vital insight into Warframe’s future. There was a lot of shop talk on changes made during our recent hotfix and how recent events will change the face of how we approach these more unique additions to the new and veteran Tenno experience.

We also showed off our upcoming gunslinger Warframe and were given some details on Trinity’s immortal skin, which means you’re now officially tired of me talking and want to get into the images. That’s fine. I get it. Let’s dive in.

Standing gain has been a hot topic over the past week or two, both within the Community and on the development floor. How fast players should gain standing, what qualifies as a reasonable amount of time, and how we should make standing feel more rewarding for players old and new is a rather delicate balancing act. No decision we implement is made lightly, and with that in mind let’s take a look at the most recent updates made to Syndicate standing.

• 10x base standing gain increased for players
• Standing cap is global to all Syndicates, increased by Mastery Rank
• Viver has been atomized from spa- is now an Infested Hive mission
• Syndicate medallions coming to give even more Syndicate standing
• Going up in Syndicate rank will have more benefits in the future

Let’s take a look at those last two points, since the others are rather straightforward. Medallions, a soon-to-be feature for Syndicates, will be items that players can find scattered throughout various Syndicate missions. Medallions can then be turned into faction leaders, who will grant bonus standing for such exceptional vigilance.

As for more benefits in the future? It’s no secret that additional Ability Mods are soon to come, but additional quests and character customization are currently in the works. The ultimate goal is to make Syndicates not simply a tool to obtain unique rewards, but to make each individual Syndicate a firm part of Warframe lore and Tenno culture.

Player Hubs are designed to be a place for Clans to recruit and players to socialize all within a physical space that helps everyone connect further within Warframe’s lore. For the time being functionality within Hubs is going to be very limited, but that doesn’t mean we want there to be nothing to do! In fact, each Syndicate has already begun to make themselves right at home on the Hubs in hopes of increasing accessibility with their newfound Tenno allies.

Keep in mind that the following rooms, while quite fancy looking, are still works in progress.

We’ve mentioned before that mini-games like Wyrmius will be a part of player Hubs, and though we imagine a lot of chatting will take place, it’s not a social hub without a few emotes. While many picture mmo emotes to be a stunning array of dances, we try to stay a little truer to the game world so as not to break the overall immersion.

What this really means, is that we need to be careful in how many ‘crotch-centric’ things we allow you to do with Rhino. Most of our new emotes will be far more reverent in nature, symbolic of the Tenno’s history in martial arts.

Making a rare appearance on the Devstream was Warfarme’s Art Director, showing off some awesome artwork on our latest Warframe. We’ve mentioned her gunslinger nature before on Devstream 40 but weren’t able to give an idea of what she could be capable of. Mynki briefly cited his inspiration as wanting to showcase a gunslinger that’s so talented they need to handicap themselves with a blindfold in combat. The end result is something familiar, stylish, and yet firmly grounded in Warframe’s unique sci-fi.

Mynki also teased the stream with the knowledge that Trinity will soon receive her Immortal Skin! It’s taken a long time to figure out the subtle details that Mynki has wanted to represent on her unique abilities in an appropriate fashion.

The Gunblade and New Stances

Coming alongside this new Warframe is a weapon entirely new to the game, the Gunblade! It’s part gun, part blade, all deadly. The Gunblade stance combines nimble, dexterous slashes with the joy of also pulling the trigger on a Grineer less than a foot away from you.

And execution kills? Well, they don’t look particularly quiet but there’s a time and a place for everything. There’s no official name for the Gunblade quite yet, but just as long as it’s doesn’t involve the words ‘Limit’ or ‘Break’ I’m sure it’ll be a pretty cool name.

We also weapon stances for the Glaive, Tonfa, and greatswords, all of which are looking pretty sharp right now. The Glaive and Tonfa continue to push the grace and fluidity of Tenno movement, and the Glaive in particular looks like an incredible amount of fun to use.

The greatsword stance is a little slower than it will be when it finally goes live, but the animations should remain the same. Also keep in mind that the sword being used is only a temporary model, not a sign of any bland looking weapon to come!

Another big change announced on the Devstream were alterations to the Spy game mode, which as of now keeps the spying to a minimum. Instead of hacking and carrying around terminals players will now need to sneak into three online data terminals guarded by a much higher caliber of security than a terminal with a MOA nearby.

Acquiring all three data terminals will complete the mission, but how you sneak into the room and obtain each piece of information is up to you. Stealth killing guards, sneaking through the vents, or simply using a bit of parkour to overcome the laser gate are all decent options. The mission is still a work in progress, but we’re taking a look to see what kinds of bonus rewards could be given for remaining undetected. Encouraging stealth play is still definitely on our radar.

The Juggernaut is lookin’ classy! Winner of the Infested Enemy Design Contest the Juggernaut always seems to come up on the Devstream. He’s made some excellent progress as of late, and what was once only a concept drawing has finally begun to take its first steps. They grow up so fast.

While the Juggernaut has been busy growing up, Alad V has been acting out like a rebellious teenager. Throwing his toys, making deployable shields without a permit, and obviously getting lax with personal hygiene is only the start of it. Infestation has gotten to his head, but that’s a problem most Tenno are happy to lend a hand with.

We still can’t tell you much about the encounter, but you’re welcome to glean a few details from what animations we showed off. At the very least we can admire how awesome Alad V is at throwing his neckwear around. Look at that form!

As a friendly reminder if you’re looking to see more gameplay footage of our updated Spy mission or a (very) rough look at our Tenno Hubs be sure to check out Devstream 41. I also wanted to say thank you to every single Tenno that has donated to our Movember page or helped participate in helping us set our Guinness World Records® title!

Raising over $10,000 for men’s health awareness is pretty incredible, and we would never be able to do it without support from our amazing community. You guys rock!