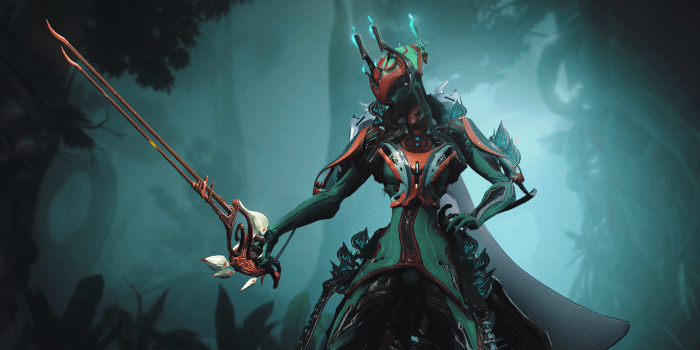 Endura
The delicate form of this Tenno Rapier conceals its ferocious and resilient force. Broca Syandana
This flowing Tenno cape is supported by an intricately sculpted brooch.

LIMITED TIME MACHETE
Machete is back for a limited time! Don’t miss your chance to grab the Machete or the Machete Blueprint in the Market before it’s gone on June 1st at 2 p.m. EST.

CLAN CONTRIBUTION TRACKING
Clan Contributions are now tracked and viewable! Credit, Platinum, and Resource contributions can be viewed per individual by any Clan member.

Obaeron, Broberon, Goat Lord…these are just a few of the names bestowed upon our faithful Oberon. With the dedicated amount of continued feedback and passionate discussions about Oberon’s changes, the time has come to release another round of changes! Oberon Prime is right around the corner so the spotlight will be on him like never before. The changes below were brought forth from Dev discussions and by you, our devoted Tenno. Our goal has always been to give synergy to Oberon’s abilities, while still giving him a way to fill multiple roles in battle. We hope these further changes do just that.
Hallowed Ground