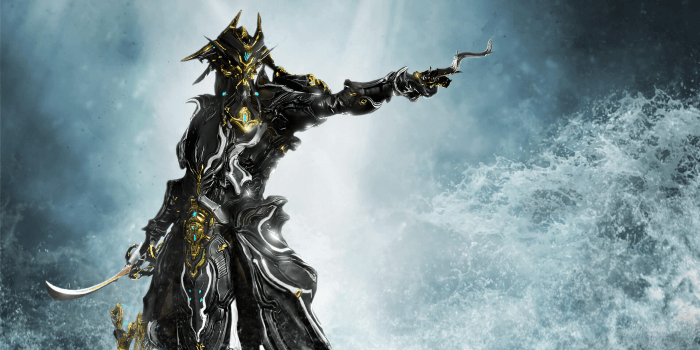 Hydroid Prime has emerged to dominate foes with the power of raging waters! This deadly mystery from the depths receives a whole new aesthetic and increased stats that even the Orokin can’t keep submerged. Armed with Prime weapons fit for this legendary Kraken summoner, we urge you to take caution when entering dark water….

*Please note that we are working on a Ballas narrated Hydroid Prime trailer to come at a later date. When the Plains of Eidolon train nears the station we will have more available hands to produce this.

Ballistica Prime
The beauty of this luxurious gilded crossbow cannot obscure its lethal purpose. As an added bonus to the Ballistica Prime, enemies killed from its Charged shot within (50 meters) range will now turn into friendly ghosts for 7 seconds!

Nami Skyla Prime
Forged by a forgotten master, these exquisite blades are bounty from a golden-age long gone.

With Hydroid Prime bubbling up from the depths, the following Prime items and their Relics have entered the Prime Vault:

In order to accommodate incoming Relics and keep the total number of Relics as low as possible, the Ducat value of the following items will be changed from 100 to 65 (Future Relic placement of these parts will also have them appear in the Uncommon [silver] tier):

We have polished up a number of issues related to the new user experience. This polish essentially speaks to the question ‘What do I do when I’m done Vor’s Prize’?