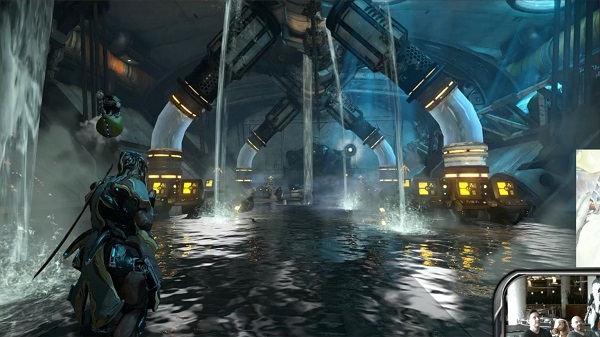 Tubemen of Regor
• Coming in 16.5 (soon)
• Huge update, the previous few hotfixes PC has received have been small in scale in preparation for this one
• Very ambitious event coming, that focuses on what made previous events great
• The first tileset that has completely received PBR
• Click HERE to see Rebecca playtesting the Sealab tileset

Law of Retribution
• On consoles, Law of Retribution was operating at 12 fps, which is why it wasn’t launched
• Multicore optimization has been a huge focal point, and maximizing optimization on the consoles will also improve performance for PC players as well
• Recent tests have been promising, should be sent for cert soon
• Nightmare mode is coming in 16.5, feedback so far has been « OMG too hard »

Excalibur Re-work
• Aiming for release on U17
• Recap: Slash Dash will ping pong between enemies in a cone shape in front of you, Radial Blind will be castable on the move and will open enemies up to Finisher attacks, Radial Javelin will become third power with heavy tweaks, new ult will allow Excalibur to draw an energy sword with a unique stance that fires energy waves with each slash
• Click HERE to see Excalibur’s sword combo animations
• Click HERE to see Excalibut’s new Slash Dash

Parkour 2.0
• Aiming for release on U17 (very tentatively)
• How stamina will interact with Parkour 2.0 is still up in the air – ironing out all the Parkour maneuvers first to decide how Stamina consumption will need to be adjusted
• Stamina is being re-viewed quite severely; the ideology is that it should restrict you from constantly performing powerful melee techniques, not from running on the walls in a cool way
• Old tilesets will be tweaked to accomodate Parkour 2.0
• Potentially re-working the knockdown/getup animations (to allow directional rolling when you getup)  and the bleedout/buttscoot animations
• Rebecca shows off many Parkour 2.0 features including changing direction while wallrunning, braking on walls, charge jumping, zipline braking, zipline swinging, and more
• Click HERE to see Rebecca playing a live demo of Parkour 2.0!
• Click HERE to see pre-recorded clips of Rebecca doing neat stuff with Parkour 2.0

Genetic Foundry Upgrade
• Coming U17
• You’ll have to retrieve a new module to upgrade your genetic foundry; not an automatic upgrade
• Automatic stasis of Kubrows that are approaching death
• There will be faster/convenient ways to get Kubrows in and out of stasis
• Kubrow Armour in U17 (next stream there should be art to show of this)
• New Kubrow breed: « Retriever » type; will have a very unique appearance

Conclave Updates
• Annihilation and Team Annihilation game (Deathmatch/Team Deathmatch) modes coming in U16.5
• There is an aura that enemy Warframes drop upon death that must be claimed for the point
• There is some Teshin-related lore that will accompany this game mode
• Valkyr, Ember, and Oberon will become playable
• The old Conclave maps will return, with added polish, including a PVP version of the Sealab

New Starchart
• Hoping to appear in U17
• 300 nodes are being condensed to 20 nodes
• There may be time-based instances, such as Vor appearing temporarily, dropping different things each time
• Similar to Alerts, but hopefully not something that punishes players for sleeping
• There will be some removal of player choice – you will no longer be able to select whichever mission type you want, whenever you want; hopefully this will be better for the game overall
• Re-viewing player made quests again and designing the starchart so that these will be able to fit into it; hopefully this will be the answer to players that resent the removal of choice

Other Stuff
• There is a feature added to mute Warframe’s sound while it’s alt+tabbed
• There will be new arrow skins similar to the Valentine’s day ones, but are not consumable
• Nothing predicted for Archwing until U17
• Syndicate emotes got postponed because the animation team got distracted by Parkour 2.0
• Dark Sector is not a completely canon prequal to Warframe
• New cloth Syandana is not coming in 16.5, but Boltor tonfas is