Umbra Excalibur
• A post clarifying all the new questions is coming
• This message needs to be communicated amongst several languages, and a complete understanding between all parties is sought before this is posted

U17
• Target release date: Next week!
• Was hoping for release this week, but it didn’t quite make it
• Starchart overhaul is confirmed to NOT be in U17
• When you boot it up for the first time, you will have a tutorial that will inform you of important changes: alt fire weapon changes and parkour changes

Elimination of Stamina
• Arcane Helmets that alter Stamina will be changed to different values
• Blocking is endless, and will now be damage reduction based on the weapon type you are wielding
• Channeling while blocking will reflect damage, which will stack with the Reflection mod
• The energy cost of Block-Channeling is on a curve; it will decease in cost the longer it’s held
• All Stamina mods that are going away will be converted to Fusion Cores, there’s an exploit here for savvy players!
• Green Chroma is being updated

Utility Mod Slot (Exilis Mod Slot)
• Tied to a Quest in Echoes of the Sentients
• There may be way to gain more slots, but at least one will be guaranteed by completing the Quest
• There are a number of mods designated as Utility Mods (such as Rush, Enemy Sense, and Handspring) that can be placed in this slot
• There may be new Parkour 2.0 mods that occupy this slot as well
• Utility Mod slot will be polarize-able with Forma
• Utility Mods can be slotted in regular slots as well, not exclusive to the slot like Auras Parkour 2.0
• The parkour tutorial will break down each element individually that’s being added: double jump, bullet jump, and aim glide.
• Bullet Jump is performed like the old slide jump: hold control and press space
• Aim Glide is performed simply by aiming weapons while airborne
• The flying from Aim Glide is explained as a limited Suspension Field around the Warframe
• Enemy accuracy will be decreased based on the player’s actions; when you are jumping, sliding, or moving at all, each of these will have varying effects on enemy accuracy
• There is a limit on how much you can wall-jump; it’s not true endlessly despite the elimination of Stamina
• This invisible resource seems to be gauged only by a draining sound while you’re attached to the wall, and there will be mods that alter it
• Ziplines are now mountable – you can run across them like a tight-rope; they felt too slow before
• All the dodges got smoothed out, sped up, and extended the distance traveled. You can also dodge in the air as well!
• The auto-roll when you do a heavy landing has been eliminated; you can dodge right before you land to ensure a light landing
• Zephyr has much greater utility with Parkour 2.0 than she ever did with 1.0
• Click HERE to see Rebecca demo the Parkour Tutorial 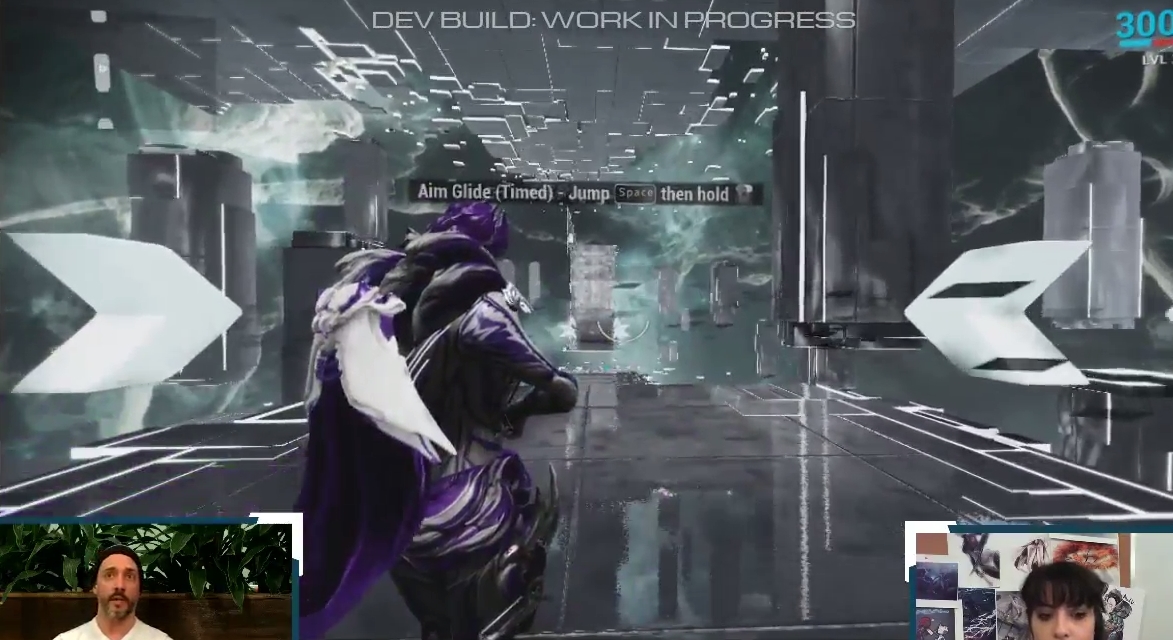 Yin Yang Warframe: Equinox
• Scott referred to Equinox as « she »
• The theme of this Warframe is balance/opposites
• Comes with 7 powers
• #1 Metamorphosis – swaps theme/form; this change also gives a temporary stat buff to encourage swapping forms regularly
• The combined form will be what is seen while in Relays/Liset, but your Energy Colour changes your starting form
• Fulls set of custom idles for each form
• The Energy cost of some of her abilities is low initially, but it increases depending on the number of enemies affected
• #2 Sleep/Fury – an AOE blast that either puts enemies to sleep, leaving them open to Finishers, or « wake them up », increasing damage dealt to them, but also making them stronger and faster
• #3 Pacify/Provoke – Provoke increases Power Strength to all allies within range, but Equinox has to pay Energy each time an ally frame uses a power
• #4 Harm/Heal – a toggle-able AOE slash (seems to travel with Equinox) that has guaranteed bleed proc, and stores all damage dealt to enemies. When you toggle it off, a percentage of the damage stored is dealt in a burst, or a percentage of the damage stored heals allies in a burst when it’s toggled off
• Haven’t decided on a Passive yet
• Click HERE to see Rebecca test out Equinox

Sharkwing
• Smooth transition to and from Sharkwing to normal gameplay
•  New Grineer Frog-Men sighted; seem to be very threatening enemies
• There are also hazards besides enemies (purple smoke of death)
• Hinted that there are secrets hidden in the design of the level… how long will it take the community to uncover them?
• Click HERE to see Rebecca try out Sharkwing and the Uranus tileset

Shotgun Buffs
• Scott’s very worried that they’re OP now
• There is a lot of « power » behind each shot via ragdolling enemies
• Optimal range for shotguns is fairly generous; around 10-15 m

Weapon Augments
• New batch coming
• They will be equippable by weapon type, like Thunderbolt Defense Mode Changes
• The action picks up too much on Wave 10, it’s boring before that
• When there’s 50 enemies at once, it’s really hard on lower-end machines
• The goal is to make Defense enemy count to be similar to Survival enemy count
• Before: all the enemies that spawn in Defense are random; sometimes there are a lot of Healers, sometimes there are none
• After: there are wimpy guys at the beginning, then heavy gunners as the wave proceeds, maybe Eximus at the end for increased intensity
• Hopefully will make it into U17 Other Stuff
• Ordis is being moved to the right side of the screen!
• New retriever type Kubrow is called Chesa Kubrow
• New Console update including Excalibur re-work is close to completion, possibly sent for cert early next week