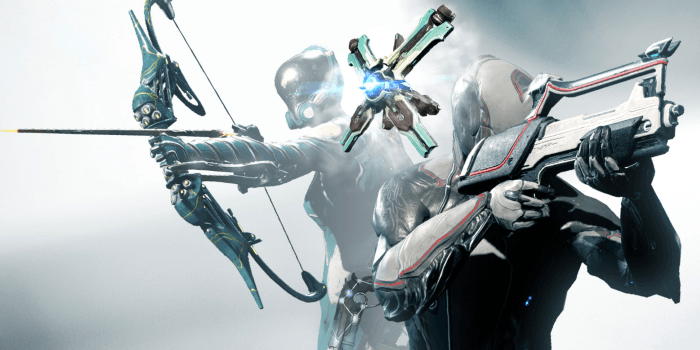 Many, many months ago we showed our community something we nicknamed ‘baby’s first Sentinel’. This quirky looking Sentinel has arrived, and it serves a very clear purpose: provide new players with an introduction to the Companion System. New player experience is always on our mind as Developers. This new Sentinel joining your Arsenal has that exact new-player approach to it’s functionality and mechanics. Say hello to TAXON! Perhaps Taxon will not replace the Mastery Rank 23 player’s beloved Carrier, but please keep in mind that it was created and geared towards new-players who are experiencing Warframe for the first time. TAXON SENTINEL
A new Sentinel has been discovered that is programmed to assist newly-awoken Tenno. With ‘Retarget’ and ‘Molecular Conversion’ as its default Precepts, Taxon protects its owner with shield restoration. Taxon comes equipped with the Artax Sentinel Weapon! Freeze targets in their tracks with this Sentinel mounted ice-beam.

Newly awoken Tenno will gain this Sentinel Blueprint by completing the first Junction between Earth and Venus. If you have already completed this Junction, you will receive Taxon’s Blueprint in your Inbox upon login and can be found in the Market for Credits! For those players who did not receive the Chroma Blueprint after finishing The New Strange quest, you will now have one in your Inventory upon relogging into the game!

CONCLAVE: HEARTS & ARROWS (starts at 10 a.m. ET)
Kill with kindness in this special variant that mixes passion with precision!

You have 24 hours to kill your friends with love and be rewarded with the new Eros Oro Ornament- Happy Valentine’s Day!